The underlay command lets you apply and remove underlayment from the roof. The icon command uses the ‘S’ character because it was originally entitled “Sarking”. Underlay is a moisture barrier material also referred to as ‘sarking’ in many markets, ‘foil’ or just as ‘moister barrier’ in other places. If the roof underlay requires more than a single layer of material, use the Cover > Insulation option.

When you selected a cover material for your job using Cover > <Metal, Tile etc>, you may have selected an underlay material as an option. At that stage, it is assumed that you want to cover the entire roof and the software goes ahead and does just that. Using the Cover > Underlay option you can stipulate exactly where you want underlay if you want the job to be only partially covered. To adjust the underlayment in this way, the type of underlay material must have been selected with your primary roof cover material first. Once you apply underlay to some part of the roof, you must define all the areas you want it to apply to.

To be able to select the underlay material, it must be defined under Set-Up > Insulation and the product Name must be Sarking or Underlay.  This curiosity in regards to underlay (which is an insulation product) is to satisfy roofers in certain markets where the colloquial term is sarking or underlay. 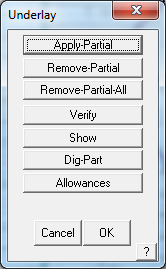 This command lets you select one or more roof planes to apply underlay to. By definition, those planes you do not select will not have underlay. By doing so, you have defined the roof as having partial underlay rather than fully underlaid.

This command removes the underlay tag from all roof planes in the job. In effect returning the roof to a fully underlaid roof. (To have underlay on the roof you must set the Underlay on the Cover > Select-Tile or Select-Metal dialogs to be something other than ‘None’).

This command will block fill the area where underlay is applied.

This command lets you digitise a shape in which you want partial underlay to be applied. Now you can have underlay partially applied on a roof plane. The method used to digitise this shape is similar to the Construct Roof > Dig-Outline command or the Modify Roof > Cut-out command.

Sets allowances for additional underlay to cover hips and valleys.