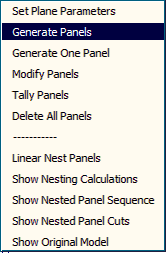 This command automatically draws individual metal panels on every metal roof plane in the model.

If you have not yet set the roof cover material with the Cover Roofing command, you will be prompted to do so. After that the metal panels are generated.

The following diagram shows a full hip roof and the metal panels.

The following diagram shows how gables on a roof plane can reposition the starting point of the layout. In the case of a dutch-gable feature, the full width sheet starts at the gable.

This function generates panels precisely the same as described above, but one plane at a time.